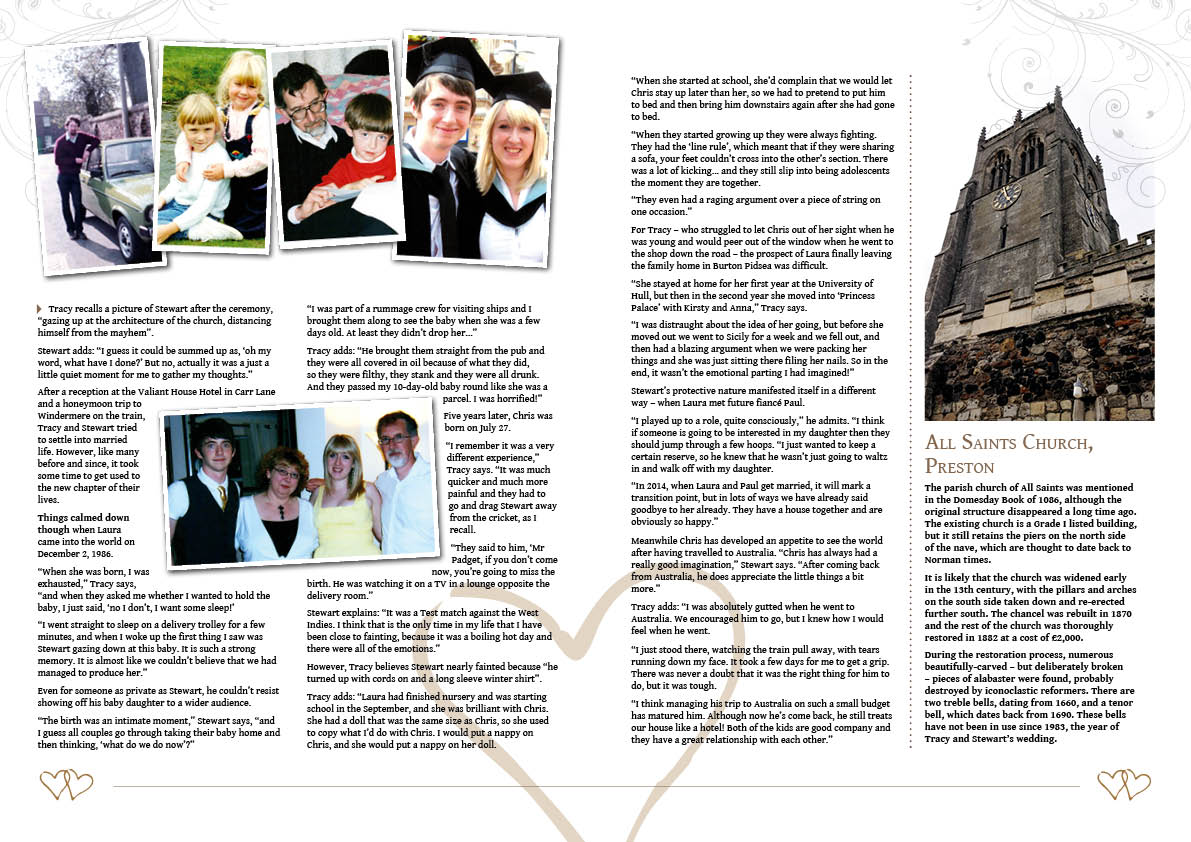 When it comes to buying a memorable gift, anniversaries can be a real headache.

How can you give your ‘better half’ something that they will remember – something that celebrates your partnership rather than the sort of individual present that you would give at Christmas or on their birthday?

Moreover, what on Earth do you buy a couple who have been together for years and years?

Here at LifetimesMAG we love special occasions and celebrations, and when you have been married for 30 years, an extra special celebration is surely in order!

Tracy and Stewart were putting plans in place to mark their three-decade threshold with a bang. They wanted to renew their vows at the same altar at which they married – All Saints Church in Preston – before moving on to Fudge Restaurant on Princes Avenue for some delicious food and bubbles with family and friends.

When their (grown-up) children Laura and Chris got in touch to request a Bespoke LifetimesMAG so their parents would be able to reflect on their first 30 years together, as well as their momentous Pearl wedding anniversary, we were very happy to oblige!

They opted for an ELEGANT style, which provides subtle colours, creative flourishes and beautiful typography to bring the best out of the pictures.

With a Bespoke LifetimesMAG order, there is the option of conducting telephone interviews, and this gives us extra-special insight into the personalities of those involved.

It is a genuine privilege for us and our writers to be given a glimpse into people’s lives, but we also find that those featured in LifetimesMAGs love the whole interview process. They often say how uplifted they feel after recounting happy memories of years gone by.

During our initial telephone consultation with Tracy and Stewart, we agreed about things they did (as well as didn’t) want to talk about, and then we devised some lead-in questions accordingly.

Then we arranged our phone interviews for a few days later, at a convenient time for them.

It had been years since Tracy had spoken about the memories of how she met Stewart, their early ‘courting’, the hilarious proposal story, the wedding, the early years of marriage, the births and childhoods of Laura and then Chris, the special family holidays, and the recent years after the little ones flew the nest.

We spoke about all these and more in a half-hour chat on the phone, and then it was Stewart’s turn.

It is very common for men to be quite cagey at the start of our interviews.

However, our writers are experts in getting people to open up, and like everyone, after a few minutes, Stewart’s guard started to come down and he told us about some truly special memories, from celebrating Laura’s 18th birthday in New York to watching the cricket in the waiting room at the birth of Chris!

He also found that he remembered things that had he had forgotten for years, such as nervously dropping the rings during the wedding ceremony!

For the pictures, Tracy and Stewart wanted to include images from the past as well as the present, so they scanned some printed pictures into jpeg and PDF files and emailed them over to us. Obviously higher resolution pictures are always better as lower resolution pictures can only be used in smaller spaces, otherwise they look grainy when they are printed out.

Tracy and Stewart did not have an official photographer for their celebration.

We are big fans of top professional photographers and their work, but no professional snapper = no problem! You can capture decent high-resolution images these days on the humble smartphone, so we used pictures taken on mobiles for large spaces on the front, middle spread and back pages.

Our writers and designers then got to work on creating the LifetimesMAG and, after a brief approval process in which a couple of details were clarified with Tracy and Stewart, we were ready to go.

Just over one week after the final approvals, the hard copies of the LifetimesMAGs were delivered to Tracy and Stewart. As well as being something to give to friends and family to remind everyone of the special day, we hope it will be something they treasure forever.

So for Laura and Chris, the anniversary gift conundrum was sorted in memorable fashion... and for Tracy and Stewart, we look forward to doing a follow-up LifetimesMAG with them after the next 30 years!

To find out more about LifetimesMAG's unique, personalised magazines, visit our Occasions page to browse the range of styles for different life milestones and Contact Us at info@LifetimesMAG.com for further information.