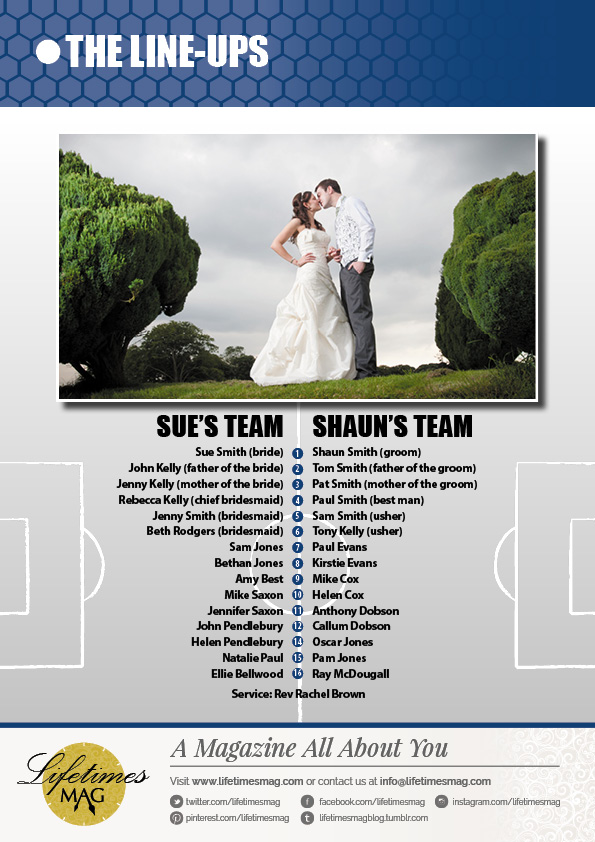 Married to the enemy

Today is a big day for football fans, with Euro 2016 kicking off in France this evening. Over the next few weeks, there are sure to be guests at weddings and other celebrations who will have one eye on their mobile phone or where they can find the nearest television in order to check the latest scores.

Of course, one way for the bride and groom to counter such skulduggery is to embrace the beautiful game as part of their day.

Football-themed weddings are increasingly common, especially with football clubs often providing ideal venues – even, at times, on the pitch at half time.

Just as it is tradition for the bride to wear ‘something blue’, one or both of the partners now commonly include a subtle feature that is related to their favourite club - whether it is a special garter or lucky socks.

Last year alone I attended a wedding that featured a claret-and-blue colour scheme, with the groom being a huge Aston Villa fan, as well as another wedding where the table names were all Hull City ‘legends’ and the order of service was presented in the form of a 'Matchday' programme - something you can order for yourself via LifetimesMAG.com.

There was also the Spanish bride who surprised her Barcelona-supporting groom by asking the choir sing the Champions League theme song.

A simple Google search of 'football wedding' illustrates how there are more than enough football-related wedding favours and paraphernalia to keep footy fans entertained on the big day.

However, few couples go as far as the Swansea City and Cardiff City fans who tied the knot earlier this year. In case you didn’t know, usually mixing fans of these two proud Welsh clubs would be a match made in hell. But this one was a little bit different.

The wedding was immersed in football, from the groom lining up a surprise video message for the bride from Swansea’s star player, and the couple walking down the aisle to the Match of the Day theme tune.

If you are not a fan of football, hopefully a wedding or at least a summer party or two will take your mind off the Euros for the next month as the rest of the country catches football fever.

But for those of you who love the game as much as your partner, just sit back and enjoy…